Saturday 30th of September 2017. Demonstrators gather in Madrid in protest of the Catalonian referendum. In front of the city hall, some perform the fascist salute while singing the Falangist hymn Cara al Sol (Facing the Sun), an official anthem of the Francoist regime. You’re probably thinking: something must be going wrong if an increasing number of citizens resort to symbols of the dictatorship to defend the unity of their country.

National elites, however, disagree. In their view the problem is not Spain, but the populist elites in Catalonia who are manipulating their electorate and instigating hate amongst Catalans. Though it is fair to say Puidgemont is no saint, Madrid’s version of events obscures a deeper problem: the failure of Spanish elites to offer an inclusive idea of Spain that appeals to a clear majority of Catalans. This was not always the case. To understand the Catalonian crisis, we, therefore, need to turn our eyes to Madrid first.

Regional claims of autonomy, especially from Basque Country and Catalonia, have intensified since the early 20th century. Madrid, however, has dealt with them in different ways throughout history. Think, for instance, in the beginning of Francoism (1939-1945), the Spanish Transition (1975-1979) and the current constitutional crisis (2010-2017). These episodes were moments in which the concept of Spain was open to reformulation. Their analysis shows us that evil wizards in the Generalitat {2} are not the only ones to blame for tensions in Catalonia. Tensions are also influenced by how elites in Madrid define Spain.

The Francoist regime (1939-1975) saw regional political claims as a symptom of national decadence. Its message: Spain, One, Great and Free, was an attack against diversity. Falangism and Catholicism were his ideological weapons. The former portrayed the existence of an eternal and indivisible Spanish race, demanded the revival of the Empire and considered the totalitarian state as an instrument to serve the nation. Catholicism brought back Spain’s favourite historical motto: Spain, the defender of God. These ideas can be grasped in speeches by Primo de Rivera, the founder of the Falangist movement, and Franco the Caudillo {3}.

Francoism tried to impose a single identity onto everyone: the “good” Spaniard. Así quiero ser (This is how I want to be), the primary school book of the regime stated, “Spain is one, because it does not allow geographical disputes to destroy its only body and soul” {5}. When the Civil War ended, Francoism portrayed the Catalans as the internal enemy threatening the unity of Spain and corrupting Spanish society. This difference between “us” and “them” justified his brutal rule. He prohibited nationalist parties and repressed regional cultures and languages, which disappeared from public places and the media. An example of this was replacing Catalan street names for Spanish ones.

Nations are conceptualisations: they are what we believe they are. Fortunately, the democratic Transition re-opened the debate of what the Spanish nation meant. Adolfo Suarez, Prime Minister of Spain (1976-1981), first appointed by the crown and later elected, was the central figure in this redefinition.

Contrary to the eternal Spain of Franco, Suarez articulated Spanish nationalism as a civic and pragmatic movement. Spain, the common project uniting different political groups and regions; Spain, the instrument to solve the problems ahead. Rather than contestable primordial characteristics such as blood, the defining element of Spain became its future, what Spain should be: modern, democratic, European. This vision relied on the faith of progress owing to the national consensus, which required constant dialogue between all different political forces. In his own words:

Words, eventually, become reality. The Electoral Reform (1977) legalised all political forces, including Catalan nationalists. Moreover, among the seven Fathers of the Constitution of 1978, two were Catalans: Soles Tura, member of the Communist Party, and Roca i Junyet, member of Convergencia Democrática (now Junts per Catalunya), the party leading the independence movement today. The Constitution {7} showed the compromise between regional autonomy and centralisation. See Article 2:

“The Constitution is based on the indissoluble unity of the Spanish Nation, the common and indivisible homeland of all Spaniards; it recognizes and guarantees the right to self-government of the nationalities and regions of which it is composed and the solidarity among them all.”

The government also negotiated the Statute of Autonomy for Catalonia, which was supported by a large majority in a Catalan referendum. Proof of its success came with Jordi Pujol’s, the historical leader of Catalonian nationalism, words of praise:

Some in this blog argue that the constitution is outdated. Well, as Bod Dylan once said, times are changing. Constitutions might need to change as well to satisfy new social demands. However, this should not obscure the point: Catalans feel Spanish when Spain is a project of inclusiveness based on tolerance and dialogue.

The house in ruins

So, what triggered the institutional crisis? In short, the disintegration of Spain as the common project. As democratic Spain evolved, Catalans asked for a new statute in the early 2000s, one that recognised Catalonia as a nation within Spain and defined Catalan as a must for its citizens as well as allowing financial matters to be discussed bilaterally. In the spirit of consensus, the Socialist government approved it in 2006. Most of today’s independentist leaders were their negotiators and defenders, including Mas, the ex-president of the Generalitat, who in 2014 was the first to rebel against Madrid organising the pro-independence consultation that inspired the recent referendum. In 2006, however, the Conservative Party (PP) sued the Statute at the Constitutional Tribunal, which rejected the notion of a Catalan nation and watered down major Catalonian claims.

Since its electoral victory in 2012, the PP has been opposed to any re-negotiation accommodating these claims. The excuse presented is the breakup of the constitutional order. This makes sense in legal terms, but not in political ones. After all, the Constitution of 1978 has not existed since the stone age but emerged out of political negotiations. One needs to look further. The lack of dialogue and the increasing confrontation that we have seen on the news responds to an official governmental stand that echoes ideas of Spain as an eternal nation based on an exclusive Spanish identity, instead of Spain as a dynamic common project. This is not to say that Spain is Francoist, nor that Catalans live under repression, even less that Catalonian pro-independence elites are innocent. However, it means that this attitude revives the creation of internal enemies and the intensification of nationalism that proved fatal in the past. Words do not lie:

The ultimate consequence of this problematic conceptualisation was the independence campaign leading to the October 1st referendum. Instead of politicians discussing the future of Spain, like in 1978, there were police forces closing pools, imprisoned politicians and the activation of article 155 of the constitution after the declaration of independence, which suppressed Catalonian self-government and centralised autonomic competencies.

December electoral results show the failure of this strategy in alleviating the problem: independentism won again. Fortunately, the Spain of consensus is still alive. In recent months, pro-unity demonstrations with radical differences from the ones shown at the beginning of this post have emerged.

People dressed in white have taken the streets without flags with a new message: Shall we talk? The objective: both parties should drop their nationalist discourses and do the hard job; finding real solutions. 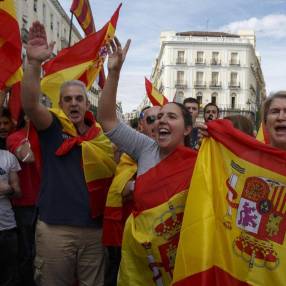 The eternal Spain vs. 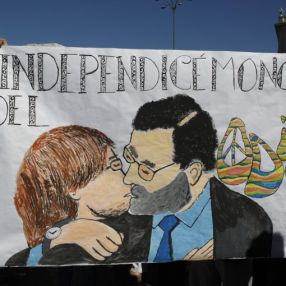 The Spain of consensus

Two models of demonstrations: the eternal Spain vs. the Spain of consensus.

The Independence seems frozen for now. However, before more people start to sing the Cara al Sol, and more Catalans become convinced that independence is the magic solution to all their problems, Spain might need to step back and ask herself: the eternal Spain or the Spain of consensus? The Spain of the past or the Spain of the future? The time has come:  Spanish citizens must choose the Spain they want to create.

{1} Pro-unity manifestation of 30th of September of 2017. Video extracted from Spanish anti-separatists in Madrid protest with fascist arm salutes while singing far-right song, The Independent, 2017. Available at (10/01/2018):

{2} Generalitat is the Catalan name for the Government of Catalonia.

{3} Caudillo was the title of Franco. In practical terms it means the same as dictator or strongman.

2nd Speech: Extract from Franco’s speech to the troops in Salamanca, 18th of April 1937.

3rd Speech: Extract from Franco’s speech to the troops in the Capitanía General of Seville, 24th of January 1960.

Vandaele, J., 2010. It was what it wasn’t: Translation and Francoism. In Translation under fascism (pp. 84-116). Palgrave Macmillan, London.

3rd year student of International Relations at King’s College London, interested in political economy and political sociology. Puzzled by the fact that we haven’t overcome nationalism since 1789.