The Taiwan issue is concerned with the political status of Taiwan: whether it should reunify with Mainland China, declare independence as Republic of Taiwan, or maintain the status quo of being de facto independent but de jure remaining within the ‘One China’ framework. While mainstream perspectives focus on Taiwan’s geopolitical significance and power politics involving PRC, US, and Japan, this article proposes to look at this issue from an angle of identity mismatch. 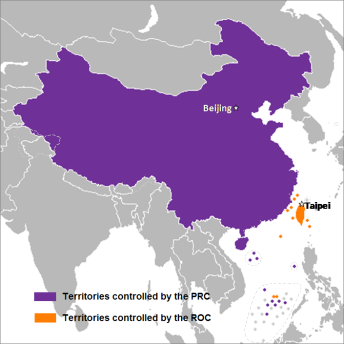 The PRC’s identity as the representation of Chinese national rejuvenation with national reunification as an integral element, comes in contrast to Taiwan’s distancing from Chinese identity and gradual development of Taiwanese identity.[1] For individuals, having relatively stable understandings of the self enables them to make sense of their lives and act independently. When one is faced with ontological insecurity, connected to deep fear of uncertainty, one struggles to ‘get by in the world’[2]. Like individuals, nations also have identities, they also need certainty and security of the self. In the context of cross-strait relations, while both sides challenge each other’s ontological security, the ontological insecurities within both societies underlie their respective narratives and actions. In this piece, the author will explain how ontological security can contribute to understanding entrenched cross-strait divisions.

For the PRC, the ‘Taiwan issue’ is a matter of reunification. Mainland and Taiwan belong to ‘One China’, but are currently governed by two different authorities. National reunification has been an integral part of the Chinese Communist Party’s (CCP) pledge since the establishment of the PRC in 1949. The ‘reunification narrative’ has created strong path dependency, to an extent that any move towards change of the unification policy would seriously undermine the CCP’s legitimacy. This strong commitment to reunification also prevails in the general public. In schools, it is taught that Taiwan is an ‘inalienable part of China’[3], while the notion of Mainlanders and Taiwanese being ‘compatriots’ is disseminated by official statements and state media[4], it is no wonder that the Chinese public strongly believes in reunification. This might seem odd, considering the fact that the Beijing government has never ruled Taiwan, while the island functions like an independent country. However, this is where history and national identity come into play. In the PRC’s official historical narrative, Taiwan is a province of Chinese dynasties, but was lost during the ‘century of humiliation’ to the Japanese Empire and separated from the Mainland due to communist-nationalist rivalries. Taiwan is one of the lost ‘seven sons’, a scar of China’s painful memories of colonialism and civil war which would be healed by reunification. In other words, reunification with Taiwan is an indispensable part of China’s national identity – a China without Taiwan is incomplete, and China’s ‘national rejuvenation’ could not be done without reunification.[5] The Taiwan issue, therefore, is an issue of ontological security for the PRC.

On the other side, the story is very different. The questions of ‘independence or reunification’ concerning Taiwan’s future and ‘Taiwanese or Chinese’ concerning national identity created deep divisions between political parties (pro-unification KMT vs pro-independence DPP) and the electorate. These cleavages created an identity crisis within Taiwanese society. Identity and future status are highly politicised, often being focal points in elections. Hence, Taiwan’s identity bears a conflicting nature and threatens its ontological security – absence of consensus regarding Taiwan’s status and future not only undermines domestic social cohesion, but also weakens Taiwan’s coherence facing the external world.

Amid this debate, Taiwan’s public opinion diverged from Mainland. Although Taiwan maintains the ‘Republic of China’ legal framework, the percentage of Taiwanese identifying as ‘Chinese’ has significantly declined since mid-1990s, while exclusive ‘Taiwanese’ identity has risen significantly (see chart below[6]). According to the most recent survey, 58% of Taiwanese prefer to maintain the status quo, followed by 23.6% supporting independence, and 11.8% supporting reunification. (see chart below[7]) In addition to external factors such as Taipei’s loss of representation in the UN and pressure from the PRC, the domestic process of ‘de-sinicisation’ – whereby ‘Chinese-ness’ is consciously diluted, also contributed to this shift. For instance, during the 2000-2008 administration, the government changed the history curriculum: Taiwanese history and Chinese history were taught separately, to differentiate Taiwan from China. This reflects the narrative of Taiwan as ‘Asia’s orphan’ – ruled by successive external forces but never by the Taiwanese themselves.[8] Pro-independence politicians disseminate the idea of Taiwan as an immigrant society comprised of diverse cultures (rather than Chinese culture as the prevalent one)[9]. By diluting the ‘Chinese-ness’ of Taiwan, pro-independence forces seek to distance Taiwan from China. These actions can be explained by the deep insecurities in Taiwanese society: to assert that Taiwan is different from China, especially facing the PRC’s rise as a great power, it is necessary to create an alternative to avoid being unified by Beijing. The manifestation of anti-Chinese sentiment is especially evident in the 2014 Sunflower movement against a cross-strait trade deal.

This identity mismatch linked to ontological security underlies cross-strait relations. For both the government and the majority of citizens of PRC, Taiwan being a part of China is a given norm. In contrast, many Taiwanese people no longer identify as Chinese. Deeply engrained identities and narratives on both sides lead to incomprehension and misunderstandings, evident in ‘online nationalism’ (Mainland Chinese netizens posted pro-China content on Taiwanese Facebook pages after the 2016 Taiwanese elections). The entrenchment of insecurities about the ‘self’ and conflicting narratives lead to protracting cross-strait division.

So, what is the way forward? To address deep ontological insecurities is not easy. However, encouraging closer people-to-people contact might be conducive to better mutual understanding. Tourism, culture and youth exchanges through student exchange programmes help to foster dialogue and encourage citizens of both sides to lay down prejudices. After all, it is amicable relationship among the people that lay ground for better political relations.