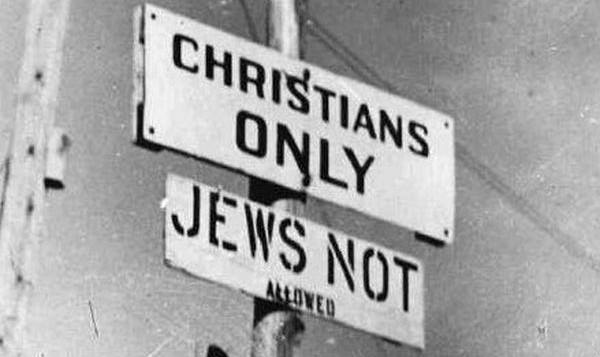 The Holocaust is a tragic, unprecedented and historically unique event. However, the problem with treating the Holocaust as ‘unique’ is that it risks putting it in a realm beyond the possibility of human comprehension, out of reach of customary historical and sociological understandings. The Holocaust was indeed a ‘unique’ and ‘unprecedented’ event but not because of its sociological unapproachability: rather, it was itself a product of our modern civilization, and in particular the emergence of nationalism. Without the necessary conditions generated by modernity, the Holocaust would have been unthinkable.

In order to understand how modernity enabled the large-scale genocide of the Holocaust, we need to examine the history of anti-Semitic sentiment in Europe in general, and in Germany in particular. Discrimination towards the Jews had extended over two millennia, making anti-semitism an indispensable characteristic of Christian Europe. From a religious standpoint, Christianity considered Jews as those who denied the teachings of Christ and subsequently had him executed, generating estrangement towards Jewish people in pre-modern Christian Europe. ​In​ ​fact,​ ​to a large extent Christianity​’s process of ​self-identification was interrelated with its rejection of the ​Jews. From a social and economic standpoint, different​ social ​groups often​ held ​contrasting views​ of the Jews. For example, in Poland, the Jews were the brokers between the noble and peasant classes, tasked with collecting the rents and taxes of the lower classes. Whereas nobles viewed them as servants, uncivilized and filthy, to the peasantry and urban folks Jews were seen as a direct exploiter – they were the enemy. Hence, in addition to being despised by both sides, Jews were entangled in a class struggle. Yet although they were hated in many facets of society – from religion and culture to economic and social relations- in the pre-modern era, there was no intense conflict and tension between Jews and other groups of people. Most of the time, Jewish people could accommodate their existence in the prevailing social order of European society thanks to strongly maintained boundaries between groups, which created a segmented structure keeping different parts of society separated. Thus, there was little inter-class communication, as each group lived in its own caste.

However, with the advent of modernity and the introduction of ideas of universalism, boundaries between different segments of the population broke down. Instead of being clearly identified by caste or group, people were increasingly treated as juridically equal individuals. One of the consequences of this was that Jews merged into Christian districts. They were indistinguishable from non-Jewish populations, as they dressed like all others and held similar social stations. Some even assimilated and converted to Christianity. Hence the distinctiveness ​of​​ ‘self’​​ and​ ‘other’​ evaporated ​​and​ ​Jews​ ​dissolved​ ​into​ ​a now​ ​culturally and​ legally​ ​uniform​ ​society. In addition, modernity also constructed certain perceptions of the Jews. Many of those averse to capitalism in the 19th century saw capitalism and Judaism as sharing a common fate. Indeed, the rise of capitalism gave the Jews money power and helped them move out of their ghettos and move up the social ladder. Interestingly, this perception of Jews as representative of materialism still exists today.

In Germany, anti-Semitism was not as deep-seated and widespread as in other European countries, such as France. However,​ ​the​ ​German​ ​unification​ ​in 1871 and ​the​ rise​ ​of​ ​nationalism​ altered the​ fate​ of the​ Jewish people​ ​living​ ​in​ ​Germany. ​The​ ​1871 ​Constitution adopted by the North​ German​ ​​Confederation​ granted​ Jews legal​ ​​equality with other Germans as well as ​civil​ and​ political rights​, through the new concept of​ citizenship. ​Ostensibly Jewish​ emancipation should have been a positive development for the Jewish​ people. ​Instead, when combined with the more sophisticated techniques of control developed in line with the process of modernization,​ ​​it set the stage for a​ ​new ​tragedy of mass oppression. ​Modern​ ​anti-Semitism​ ​marked​ ​a​ ​new episode in the history of anti-Jewishness,​ in​ ​which​ the​ separation​ of​​ the​ Jews​ ​now​ ​became​ ​an​ ​issue​ ​that​ ​needed​ ​to​ ​be​ ​rationalized,​ ​administered, ​technologically​ designed​ and​ ​managed.​ ​The​ ​separation​ between Jews and other groups ​lost​ ​its​ ​naturalness​ ​as​ ​in​ the ​pre-modern​ ​era.​ ​In​ ​fact,​ ​modern anti-Semitism​ ​was​ ​no longer about​ ​the​ ​great​ ​difference​ ​between​ the​‘self’​ ​and​ the ​‘other’,​ ​but ​its​ ​great​ ​absence​, and the need to reconstruct it through the instruments of modernity. In addition, nationalism enabled the persecution of Jews through one of its key components, the concept of allegiance. The need for loyalty to the nation is a permanent feature of nationalist rhetoric, and can be found in many of Bismarck or Hitler’s speeches. Yet because the Nazis viewed the Jewish people as in a state of ‘ubiquitously homelessness’, their disloyalty and unnationalistic feeling for Germany was assumed, turning them into threat for the nation.

Therefore, the rise of nationalism not only redefined Jewish identity, it also produced a new imperative: the extermination of the enemy within, for the sake of an ideal, perfect and conflict-free society. The process of and the Holocaust itself was like a gardening job for the Nazi regime, with its propaganda replete with images of Jewish uncleanness and filth. The Nazis created an illusionary image of the Jews to support an artificially constructed social hierarchy, and to justify the elimination of Jewish ‘impurity’ for the sake of racial hygiene. Furthermore, the enactment of the Holocaust was distinctively modern. The extermination of the Jewish​ people​​ ​was​ designed and managed discreetly, and argued​ for rationally by​ the Nazi​ modern​ bureaucratic​ ​apparatus. ​Nazi bureaucracy carefully embedded the task of Entfernung [removal] within a scheme of “means-ends calculus, budget balancing, universal rule application”. For​ instance, ​the​ ​project to remove the Jews ​to Madagascar was eventually rejected because of concerns over its ​cost-deficiency ​and​ distance-difficulty. Instead, it was decided that​ ​it​ ​would be​ ​more expedient and less costly to execute​ them all in order to create an ideal and perfect society characterized by ‘purity’ and ‘cleanness’.

The Holocaust is not an aberration in the trajectory of the civilizing process, but rather an outcome generated by the very process of modernization, in concomitance with the rise of nationalism. It is scary to think that the idea of modernity, implemented by the nation-state, in search of a purposefully designed, fully controlled, and conflict-free society – a gardening society – is potentially genocidal, and thus that a large-scale Holocaust-like event could happen again in the future.

Tran is a 3rd year International Relations Student. She is originally from Hanoi in Vietnam. She is interested in East Asian politics and architecture.